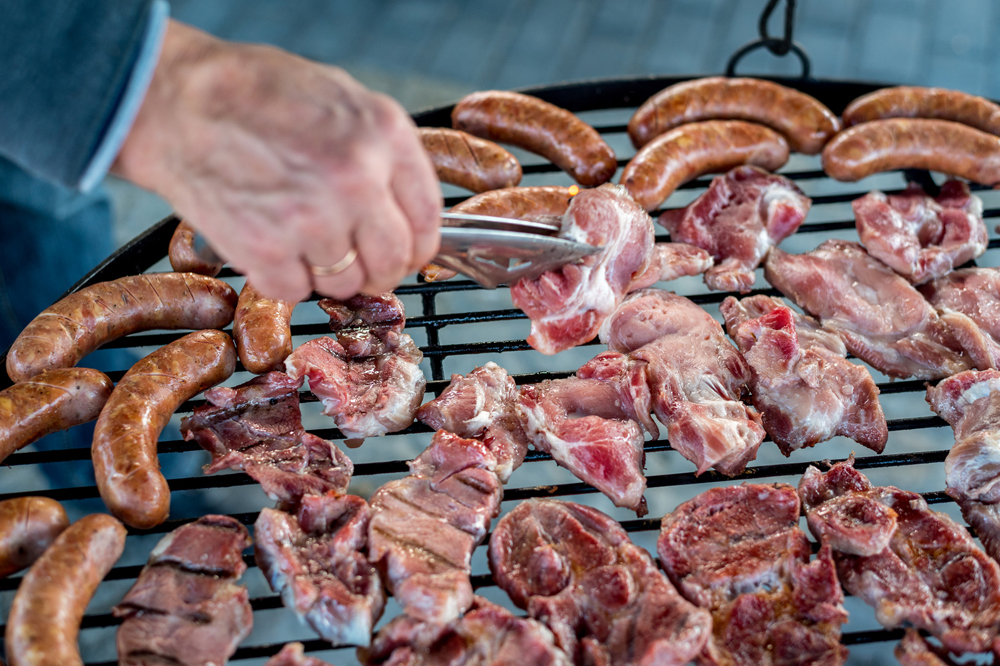 How to Cook Bacon on Electric Griddle

Processed meats are one of the most familiar kinds of food to mankind. There have been records suggesting that the act of meat processing has been done since the B.C. era, with the earliest processed meat known to man being sausage.

As the years and the centuries went on, the types of processed food have greatly increased, and so did the frequency in which they are consumed.

Given that processed meats only take a few seconds to a few minutes to prepare, they are popularly consumed during breakfast time, or when people are usually in a rush.

Because of how easy they are to prepare, coupled with the delicious taste, and how they could be stored for long periods of time, people in the U.S. alone consume more than 17 billion pounds of processed meats in a single year.

Of all these processed foods, one of the most widely eaten, as well as the most familiar, is bacon. It’s so popular that the average American consumes about 18 pounds of it on an annual basis, with the status quo for its consumption staying more or less likely the same.

Bacon as a Processed Meat

Bacon is a processed meat product that is commonly made from pork. It could be prepared from a different set of cuts, with each cut source having a different percentage or quantity of fat, with the part from which it is obtained referring to the cut which it is made from, with some parts being leaner or having a higher percentage of fat compared to others.

Bacon is familiar for its thin and long shape that usually shrivels once it is subjected to high heat through cooking.

In order to make bacon, the parts coming from either the belly or fat back of the pig are sliced extra thinly, with its width measuring around less than one centimeter, and length typically measuring around 7 to 8 inches.

These slices are then cured in large quantities of salt, either in a brine solution or in dry salt, with added chemicals such as sodium nitrite, as well as potassium nitrate or saltpeter, erythorbate, or sodium ascorbate, all of which aid the process of curing and serve as product stabilizers.

These additives are also aimed at increasing the shelf life of the bacon strips in order for it to be stored for long periods of time.

How is Bacon Prepared?

Given that it is a common breakfast food, bacon is usually prepared through simple stove-top frying. Oil is not usually added, given that the process of frying renders the oil from the bacon.

While it could be enjoyed as it is, bacon is usually enjoyed with eggs and bread, or as part of a “full breakfast” with other processed meats such as sausages.

People have loved bacon around the world because of its great taste, and could be considered as one of the most palatable dishes around.

As a matter of fact, people have also used bacon as an ingredient in several other dishes, including pastas, pizzas, and even in soups, spring rolls, burgers, as well as cakes and pastries.

The conventional means of cooking bacon is on top of the stove, with it being placed on a non-stick pan, or any pan with a small amount of shortening, and being subjected to a low flame to prevent it from being burned, given that it burns quite easily.

The cooking time of bacon is roughly three to five minutes, depending on how crisp people would want them to be.

Other Means of Cooking Bacon

While stove-top cooking on low to moderate fire is the most common means of cooking bacon, some people don’t sit well with this process.

The reason for this is because the bacon could end up getting charred, given that flames from a burner might turn out to have irregular rates, and could fluctuate in terms of intensity every now and then due to several factors, such as having a loose knob that could turn all of a sudden, or due to the steadily declining quantity of LPG from the tank.

Other means of cooking bacon could be in an oven, or possibly even through an electric girdle, both of which provide a more stable stream of heat given that they are powered by electricity.

Why and How to Cook Bacon on Electric Griddle

Cooking on Electric Girdles is best for cooking bacon in large quantities, given that these griddles have a larger surface area and could therefore cook more slices of bacon with every batch.

Also, the slow and steady heating mechanism of electric griddles allows for a crispier and more even cooking of bacon, without worries of a sudden fluctuation of heat intensity or the gas suddenly running out which could result to bacon getting burned or undercooked despite the careful monitoring.

Furthermore, cooking on a skillet on top of the stove could turn out to be dangerous in the long run, as it is notorious for splattering oil once it becomes very, very hot, and when bacon has just been put on top of the skillet.

Cooking the bacon on the skillet is just as easy as cooking on the stove top, but it’s much quicker and safer.

To cook on top of a griddle, all you have to do is to pre-heat the skillet to 325 or 375 degrees Fahrenheit. You would know when the griddle is hot enough and ready for the bacon once water splatters instead of merely staying on top once you put it.

Once the griddle is ready, simply place the bacon evenly on top with the help of a kitchen tong.

Cook each side for approximately 5 to 8 minutes, or when the bacon starts to shrivel a little bit and becomes brown on the side. This should signal that the bacon is ready for flipping to the other side. Once the bacon strips have browned, it’s time to remove from the griddle.

The Best Griddle for Pancakes

Electric Griddle vs Gas Griddle: Which One is better?

How to Take Care of an Electric Griddle